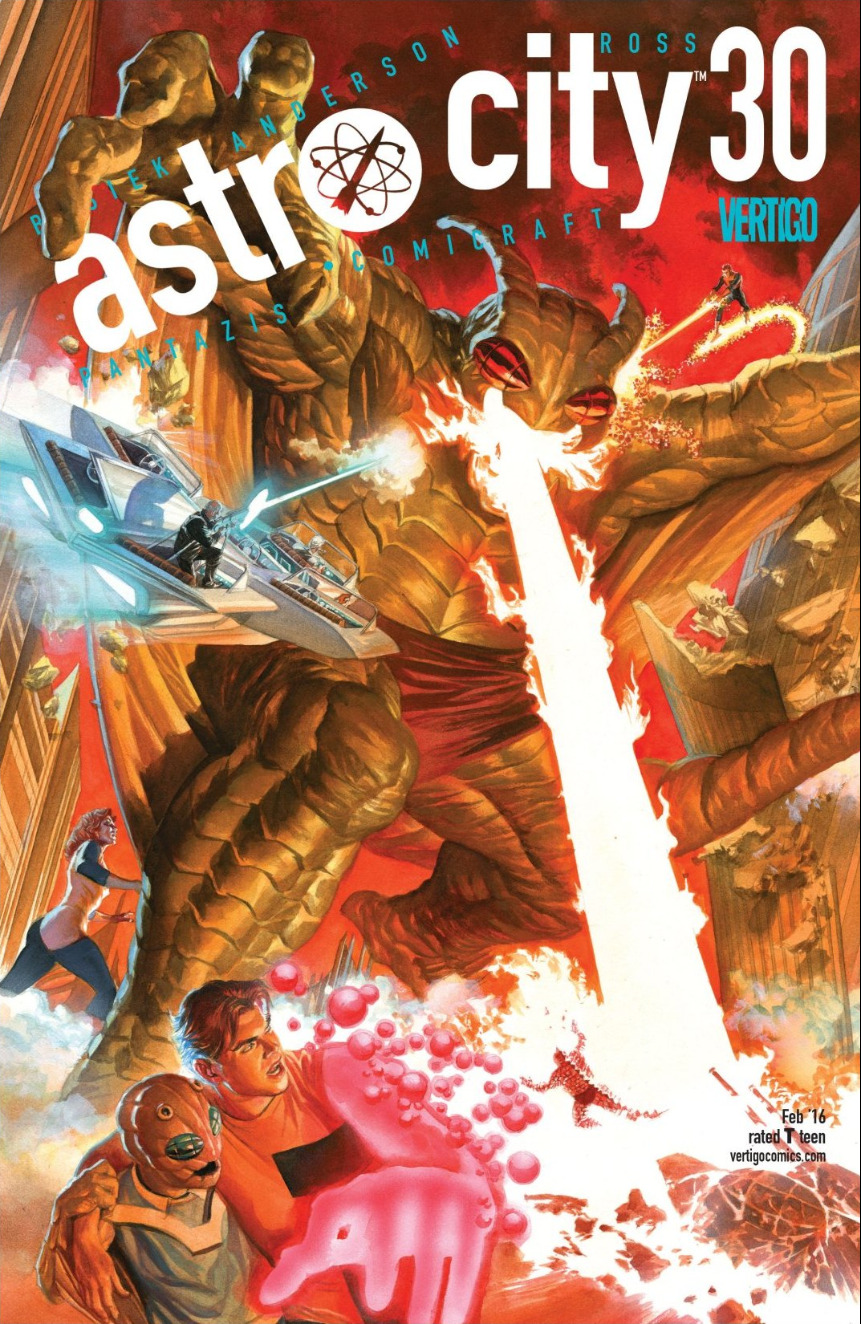 There’s a saying, that no plan survives contact with the enemy. The same could be said for propaganda.

When we left off last week, Zozat – our young bug-boy empath – had met an injured member of the First Family, and this week it’s clear that he’s hesitated to hand him over – because it turns out, his empathic abilities don’t just work on other natives of Zirros…

… but on “aliens,” too. Now that he understands Karl’s point of view, suddenly the dehumanization (or dezirrosian) of the enemy is a lot harder.

As an aside, look at Karl’s comics hair.

I love Comics Hair, those weird points that stick up like they didn’t have time to comb their hair before they went out to beat up the forces of evil/good/whatever. I reminisce about those halcyon days where they bothered to style Hugh Jackman’s hair up into those points, which of all the costuming details to bring over into live action…

Zozat goes back home, finding that his sister’s been “activated,” and is ready to go off and fight the great evil. Reading this, I can’t help but think of all those nameless goons that get thrown at heroes in heroic fiction, cut down, or – and this is my preference – disabled without a need for murder, the preferred tactic of the superhero comic. The latter makes this a more interesting read, because usually stories that focus on the other side tend to highlight the tragedy of warfare in and of itself…

… but this story asks us to see one side as distinctly less humane than the other, and still ask us to sympathize with them. It’s the kind of story that feels like a product of an era where Western society is, more and more, confronted with its litany of sins and asking if it’s really morally righteous at all.

Zozat taps into the spheralicity – the sources of Karl’s power, as well as the First Family’s signature energy (and considering it’s basically a bloodstream full of Kirby Krackle, it means that the King of Comics is literally in their blood.) Since the empire of Zirros can’t detect it, it’s an ideal secret signal. Zozat reunites Karl with his family, and sees them leave, full of nothing but questions.

He returns home to watch the war live on TV – reminding me of my youth, when I first encountered the first Iraq War and its fully televised blitz on 24 hour cable news. The First Family is squaring off against – the Ubersaurus!!! It’s made out of 10,000 Zirri warriors, full of tinier men, fused like Bug Voltron into an unstoppable –

So, yeah, the First Family beat it. Surprise!

The conclusion of this story goes to some interesting places, because it’s implied – heavily – that doubt is what caused the weakening of the Ubersaurus, doubt that Zozat introduced into his sister’s mind. But Ziri is not saved by this doubt – she is destroyed by it, no longer considered fit to be a solider, having been mentally conditioned via mind control to be nothing but.

Usually doubt is considered the seed of revolution in stories such as this, but right now all it is, is a seed – and possibly it might topple an empire, but for now all it does is eat away at its foundations. Zozat isn’t going to lead a noble crusade that’ll be wrapped up by the end of a 22 page comic or a long story arc. It might not even go anywhere at all – or he might grow up to enforce his own brand of tyranny on the cosmos, since all that there is, is a lack of faith in the Empire, not a grasp of a better way to live without it.

We don’t know (though if Astro City carries on long enough, we might find out) and in this way, we relate to Zozat most strongly, because not knowing how his story will go on from here leaves us as full of doubt as he is.

Next week, it’s the return of Astro City’s oldest supervillain – but is the Living Nightmare still a villain, or something else?