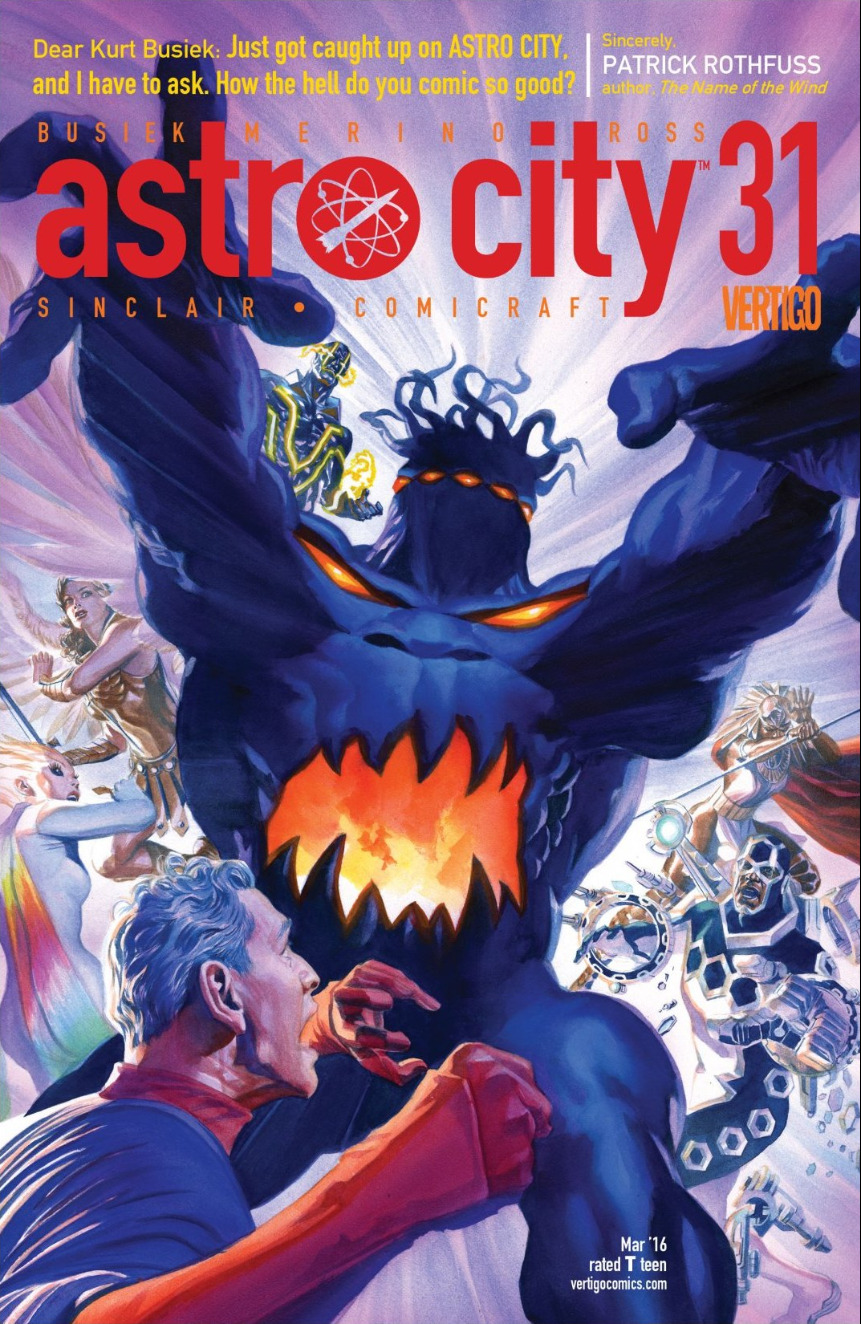 (What a month this week’s been. Sorry this fell behind. If you don’t know why, trust me: it was a good reason.)

… which is appropriate, considering what happens.

The Living Nightmare is about as close to iconic as an Astro City villain gets; usually an Astro City villain is merely there to bring out something about a passerby or a hero. Sometimes they get focus issues in which they find out that they want money more than fame, or where they realize that knowing a superhero’s secret I.D. is not all it’s cracked up to be. But usually, that’s all they get.

But the Living Nightmare fought Samaritan to a standstill, and the rules of superhero comics apply: if you can stand up to the Big Gun, you have heat.

It helps that the Living Nightmare is an amazing visual, the kind of thing you wouldn’t dare translate to the big screen (though in this post-Raganrok world, anything’s possible.) The iconography of a jack-o-lantern – a human face reduced to abstract light in the darkness – combined with a head that is all eyes but no mouth? There’s a lot of psychology you could read into all of that.

This time, the Living Nightmare is illustrated by Jesus Merino, who is quickly becoming a regular on this book – Merino’s take on the Nightmare is less a formless shadow where the mouth on their chest is the only detailed thing, as illustrated in Astro City #26, and more a mass of muscle where it’s the face that is flatter and more featureless. Anderson is the Astro City artist, far as I’m concerned, but seeing other takes like this brings to mind just how much the art is the comic.

This issue, various people are getting nightmares about being the Living Nightmare, which was last seen being sucked out of Samaritan and into teensy glass tubes. Now they’re free and they’re gunning for Honor Guard – but once again, the Nightmare’s changed, and not all is as it seems.

We get a flashback to the 1960s, where they’re created, and some brief history of their exploits throughout the years. There’s a brief aside where the Living Nightmare’s consciousness is overridden by a soldier…

… in a panel that just screams The Weird Era (as in, “hey, remember that weird era of the Justice League where they hung out in Detroit?”) This is where I started to go “hmmm,” and having them mention that the Living Nightmare always represents fear but always changes in how that is expressed, sealed the deal: he’s the Hulk.

Okay, not exactly the Hulk, but all the interactions people have with the Nightmare in this issue sure seem to evoke the Hulk. The way the Living Nightmare embodies a primal human emotion that seems bottomless, the way they had a face turn, the way they’re a mercurial, ever-changing, massive physical threat, born out of the 60s? Pop psychology may not be the atomic bomb, but it’s hard to argue there’s not a link between the results…

But the most important thing that the Living Nightmare shares with the Hulk is not what they are, but what they represent – that a universal human emotion, even a negative one, is a part of our lives and can’t just be switched off. That it will change, and that it will never be fully under your control, and that it will always be there.

By the end of this story, the Living Nightmare – under their own volition – joins Honor Guard, to learn about themselves, and Samaritan – who not too long ago, was poisoned by the Nightmare’s presence – reaches out to grasp the hand of friendship, signifying that fear can be a positive – that it can keep us safe, just as superheroes do.

In other words, he turns face. See how much effort I put into setting up that pun?

It also gives us Happy Living Nightmare, which is a treat.

A short one this week, but next week, it’s the return of Steeljack, who’s become a private dick leanin’ on stoolies and sortin’ out all the “Suzie Squealers” and “Danny Dime-Droppers” that are just part of being a totally realistic private eye. See you then!