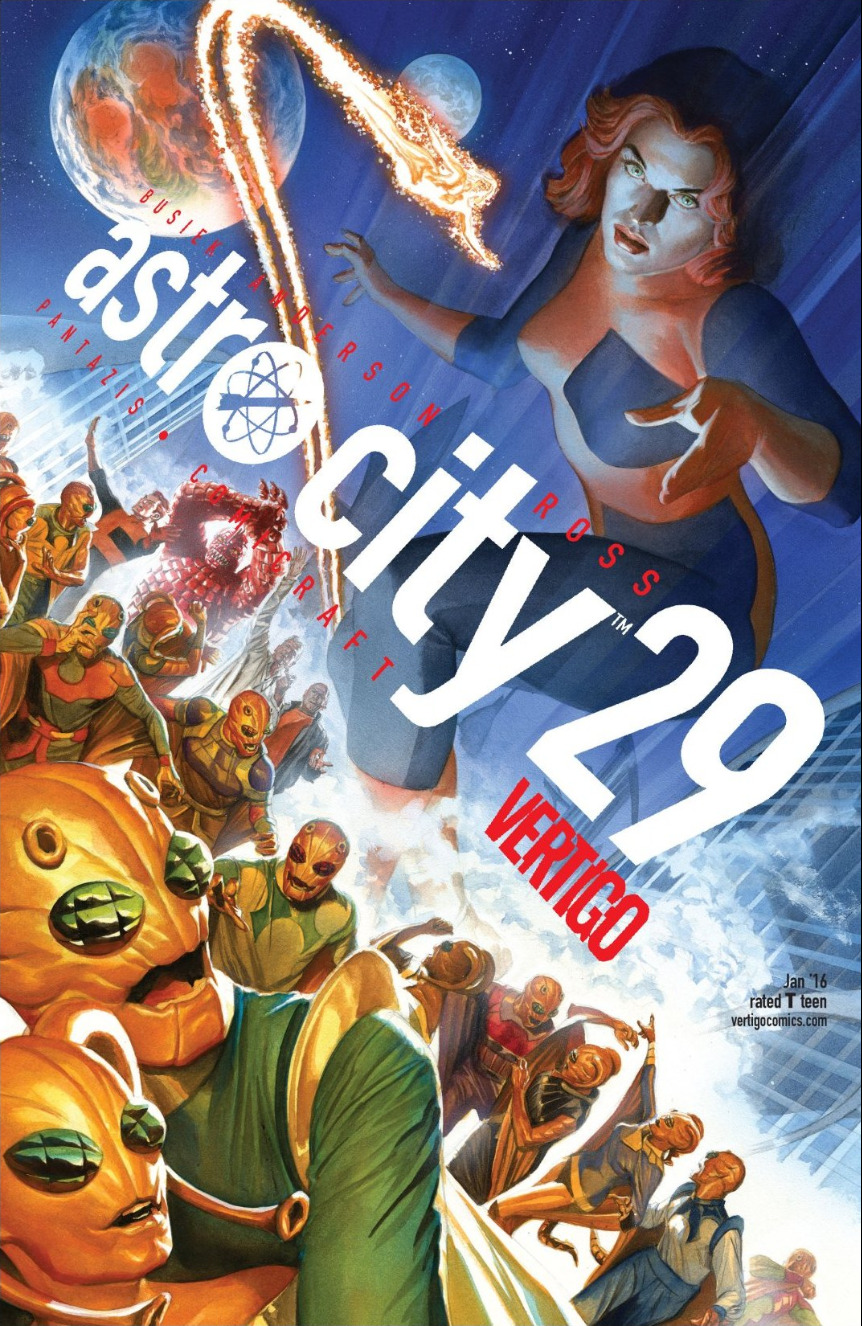 The one thing that everyone hates, yet is seemingly inevitable, is the monoculture alien race.

You know the one – the one where all the aliens are either warriors or capitalists or poets or masters of space magic and there’s one government, one religion, and so forth. The moment you travel to another world, you decide to simplify things down real far for the humans on the other end. (Or, in fairness, for the humans coming up with this whole thing.)

It seems inevitable because when you have to put out a dozen of these things a month, and you’ve got limited panels and limited page counts, you need a little shorthand, the same as how you need Hero Colors and Villain Colors. All the same, the question is, where are the people on this culture who disagree?

This comic takes place on an alien world whose political system has a) fought the First Family many times, and b) crushed all political dissent. If radicals are out there, they aren’t going near this story, because this story is about young buglike beings in a caste system where their specialties are chosen for them via their innate gifts – a dystopian outcome of one vision of a mutant-only society. They’ve also being doing science projects that are all centered around warfare…

… which is goofy, but considering we’re running on Superhero Universe Rules, where a teenager might invent a new kind of polymer and use it to swing around Manhattan, it fits the genre. And it fits the story, of people who are conditioned; who’ve had propaganda raining down on them from birth.

It’s hard not to sympathize a little bit with the main character, Zozat, who’s been fed a diet of propaganda about the First Family that plays into the narrative conceit of the superhero: the superhero always wins, but never wins once and for all. By playing up every time the First Family wins – i.e. playing them up as invincible – and simultaneously pointing out that the Zirr Empire still stands, i.e. them never scoring the complete knockout – the enemies are simultaneously terrifying, but weak before the might of the empire. This turns out to be a pretty critical component of fascism, argues Umberto Eco. (The bullet points of this essay are not all in this comic, but so, so many of them are.)

So perhaps having a homemaker in a dress evocative of a 1950s housewife is on purpose, or it could be a nod to Jack Kirby’s more eccentric tendencies, like giving Alien Jesus a surfboard.

One thing about this comic that stands out is the alien language that is used by the people of Zirros; it’s far enough from English that it’s decidedly not English, but close enough that it’s understandable. It’s an old literary trick, and I think it works best in comics; even when you don’t know what the word means, you can see what it’s being applied to and take the leap from there. I don’t know what a bonder or a flamer is (apart from the usual grasp I have of these terms) but it’s pretty easy to put two and two together when you see a child bug breathing flame.

The other thing that leaps out is the outsider POV on the First Family themselves, who start out as evocative of the Challengers of the Unknown and of course, the Fantastic Four; but while the Fantastic Four have ossified in some ways, the First Family – by having their family expand and grow and having new members get born and grow up – feels like what the Fantastic Four could have become, were it not for the issue of Superhero Comics Time. Normally I like Superhero Comics Time and its Jeremy Bearimy ass way of keeping characters young, but it has its drawbacks; Astro City, once again, posits a different path, and a potentially better one.

One of these younger characters is shot down…

… and now, Zozat has a chance to truly serve the Empire, if only he could do something about all those nagging doubts he has.

What’ll Zozat do? Will the Empire fall before one brave bug-boy who can make a difference? Part two of this story, next week!