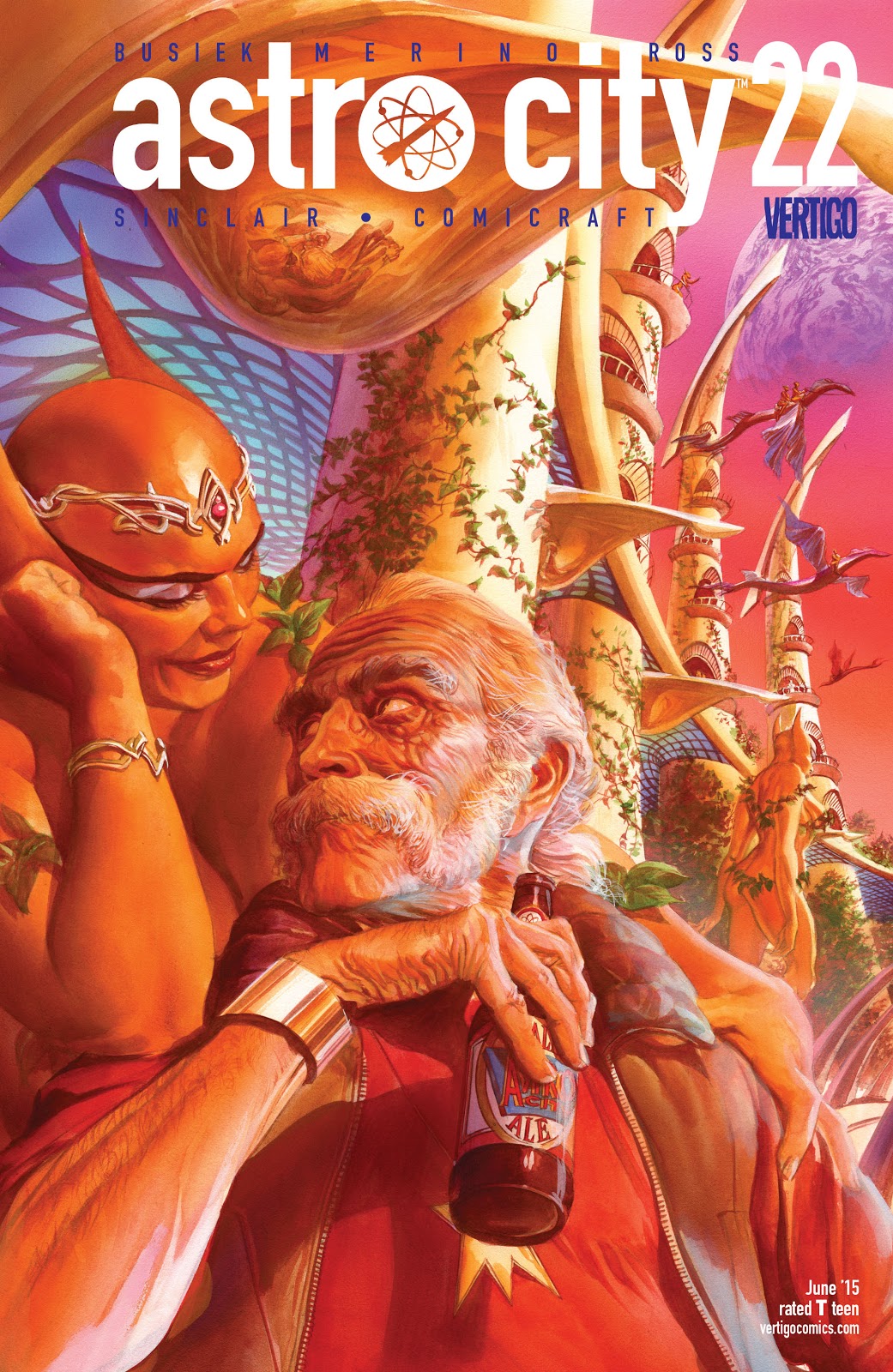 The moment I saw this facial hair specimen…

This issue of Astro City is a somewhat sedate yarn, tying into the overall themes of the series in more ways than one and featuring guest art by Jesus Merino. Merino’s art is far more stylistic and detailed, a lot of scratchy ink lines and a slightly rubbery feel and evokes early 90’s Todd McFarlane on Spawn. Which is an unusual choice for a superhero whose heyday was the 1970s.

Still, the layouts and storytelling are as solid as ever, switching from immediate storytelling to the more montage-like feel that the series uses for extended flashbacks. It all works.

This is the story of Duncan Keller, who’s a bestselling author, writing fictionalized accounts of his exploits as a space-traveling superhero with a sweet mustache – a conceit that has me wondering just what fiction looks like in a superhero universe like Astro City. Who’s going to be impressed by a novelist who invented the space-shark when you know actual space-sharks are real? Is your standard issue Thinky Sci-Fi Novel stored in the historical literature section? Did Forrest Gump meet the Silver Agent?

Once you start asking questions about the nature of a fictional world as far removed from ours it can be difficult to stop, and Astro City does, I feel, miss an opportunity to examine it through this lens – because examining the nature of this sort of thing and knowing when to stop is the series’ stock-in-trade.Instead, we get a story about Duncan’s secret ID, Starfighter, who has the superpower of 70s cosmic magic in the form of the Lorus, which is not superpowers based on an expensive wristwatch.

Its superpowers are based around drawing, which is a nice touch in a medium where there are around a hundred drawings in any given month. In its root form it is evocative of the Star of David, conjuring up the genre’s roots in Western comics and the often-Jewish creators behind them.

So this 70s cosmic space hero saves the day and gets a wife and family on this faraway planet of Jarranatha, and what you need to know about the people of Jarranatha is that they are so naked oh my God.

Everyone on this planet is that unique kind of naked that is Comic Book Naked, where a convenient scarf or cloud or collection of vines obscures female-presenting nipples and the groinular area and otherwise the artist is in effect drawing a naked person that, most often, is a lady.

There’s a few million essays that could be written about the female body in comic books, and how – since superhero costumes are often, in effect, the nude figure with details painted on – comic book costumes reflect the attitudes towards nudity and sex of the people creating them, with a long list of excuses as to why this woman has to be Comic Book Naked. Say what you will about Watchmen, but at least the major figure in the story who winds up naked the most – and full-on there’s-his-dong naked, not Comic Book Naked – is a muscular blue man who painted a target on his forehead to trick criminals into shooting him there.

I love Kurt Busiek’s work to the point that after I’m finished this series I might up and write a book about his career, but ladies who are Comic Book Naked show up a lot in his writing. There are as many underdressed concubines and sorceresses in his collaboration on Conan with Cary Nord as you’d expect; there are naked statue ladies drawn by Ben Dewey in Autumnlands, and naked statue ladies are a whole category of “don’t ask” on DeviantArt; his best Superman work, with Carlos Pacheco, has Lois Lane in her undies and several drawings of Arion the Immortal’s lovebed, which is not what I’d expect in a Superman comic. (To be fair, we see Arion’s implied naked rear end in that  – but also, there’s a lot more women than dudes in that scene.)

Now to be clear, I’d rather have a sexy naked person in Superman than see a superhuman rip someone graphically in half, intestines in full view – and the latter seems to be the “let’s make it mature” trend of superhero comics since Watchmen and Dark Knight Returns. Graphic and horrible violence is rarely a good thing (even when necessary, it’s regretfully so) and I don’t know if you’ve heard, but sex is pretty fun. It’s been fashionable to bag on Savage Dragon of late for veering into outright erotica, but I was around for those times when superhero characters in Image Comics would get blown up in a shower of gore, and I’ll take jokes about shaving one’s groinular area over that.

But while I’ll take one over another, you don’t have to have either, really. There’s a good argument to make that traditional pow-socko superhero violence divorces the action from its consequences – and you can also make the case that having a society where people are naked for no good reason, but sex is only obliquely mentioned, presents sex and nudity as fetishistic things within the story. It breaks certain taboos but keep others in place in a weird form of nerdy arrested development.

I’m reminded of commentary by Ronald D. Moore, when talking about his revival of Battlestar Galactica – about how science fiction fetishized the female body but never truly dealt with sex. How it was always Leia in the bikini or the Orion slave girl and never them in bed with someone; how censors had no problem with Six’s various costumes that took advantage of how Tricia Hefler is a very attractive woman by Western standards, but when she was in bed with Baltar there was a limit on the number of implied thrusts they could have. Always the wanting and never the having, never the messy politics of sex and always the consequence-free fun of the winky striptease, the “no, she has to wear that, because of the reasons we invented.” Battlestar Galactica is already fairly outdated with regards to sex (what queer characters it has mostly wind up contributing to the Kill Your Queers trope) but it was bang on with this critique of sex in nerd spaces – one of the many ways it was ahead of the curve.

The previous story arc dealt quite well with Quarrel and Crackerjack’s messy sex lives (and Crackerjack’s plunging v-neck costume was a blow for gender equality in superhero costuming.) This is a return to the norm, and a distracting one. All I can think is “why is Duncan still dressed like he’s following the Grateful Dead around on tour if he is on this incredibly naked planet.” At least John Carter hung it all out when he ran around on Mars.

His daughter, Trill, even has a more revealing version of his Starfighter outfit as she trains to be the next Starfighter, along with another human and a sentient bee swarm, an octopus and a cosmic space sloth. This is the central point that the story is building to, and that in a sense the series is starting to structure itself around – that the older generation is stepping down, piece by piece, to be replaced by the next one. It fills Duncan with disquiet, both because of the sidekick he trained, and then failed, and because he is realizing that it’s a battle he isn’t meant to fight. And his words…

… are oddly evocative of the Broken Man’s, from Astro City #5:

It’s stated in the story that the Lorus isn’t just life, but art – the act of expression and creation – and this is a theme that resurfaces again and again throughout the series, and will be covered in the months to come. So Duncan does the hardest thing a superhero has to do, and accepts that there is something he can’t do anything about. That whatever fire needs to be put out, it’ll be up to the next generation to do it.

All he can do is hope he trained them well, and retire to a life of contentment on his adopted homeworld where they never invented the shirt. There’s worse fates. Like many characters in Astro City, his story gets to end.

In the next issue of Astro City, we finally get a story featuring a sentient gorilla, the comics trope that instantly brings a smile to my face due to all the Silver Age DC I’ve read. See you then!