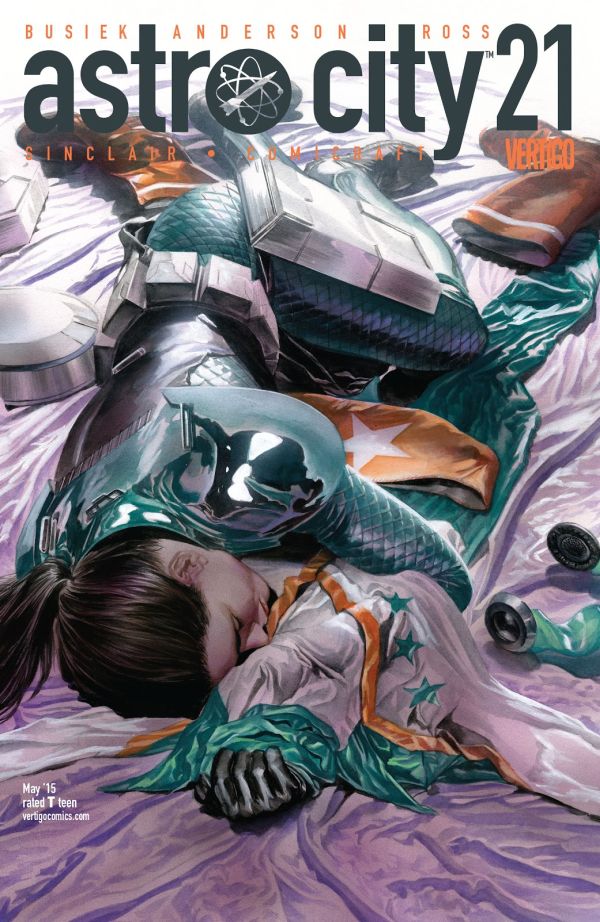 “Genre savvy” is a loaded term in superhero comics.

It conjured up evocations of that kind of superhero comic from the 1980s, the Watchmen or Dark Knight Returns or Squadron Supreme – the story that takes apart genre tropes like the villain who monologues or the just-in-time rescue. That sort of rampant deconstruction is what Astro City was supposed to be the counterpoint to. So when it shows up here, I feel a little like the comic’s about to remind me that I’m reading a superhero comic and it’s all kind of silly.

But I needn’t have worried. Genre savvy only really gets cloying when it implies the characters (and the creators) are such hot shit that they’re above this silly nonsense. Even if Crackerjack thinks he’s got this superhero genre thing figured out, well: he’s supposed to come off as someone who thinks he’s hot shit (and inevitably finds out he isn’t.)

Crackerjack has figured out that sometimes, people in a superhero comic get de-aged. Maybe they turned out to be popular enough to keep around after the continuity housecleaning that left them aging in real time, or maybe someone just forgot to factor in the Jeremy Bearimy style loop-de-doo cognitive backflips needed to make superhero comics time make sense.

But the way the genre is supposed to work, doesn’t work for him – this time, the fact that Astro City isn’t a typical superhero comic means that he’s not going to endure a typical fate.

Since the events of last issue, Gormunghast (The Living Castle!!) has led the heroes on a merry chase to the Black Lab, where they finally track down the location of Crackerjack – and find out that he’s been cloned, his physique and moves replicated in bio-drones that remind Quarrel that Crackerjack isn’t 20 anymore, and neither is she. After some detective work, they find him. 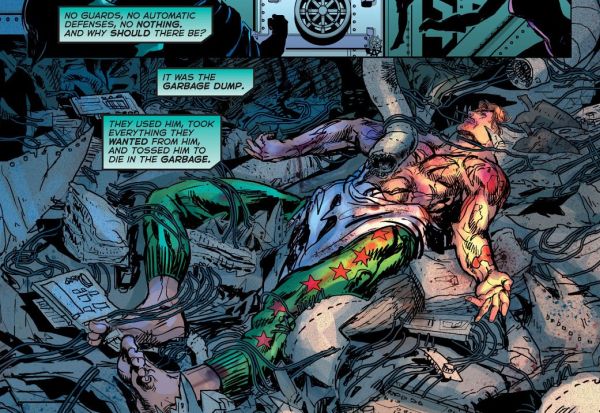 Brent Anderson’s style is in particularly fine form here. Instead of the square jaws and perfect physiques of other, slicker superhero artists, Anderson’s figures seem more human – a little wavery around the edges, a little less like Greek statues come to like (and Greek statues the way they were originally colored, to boot.) All this potential frailty manifests in the heartbreaking mess that Crackerjack is left in – all but coming apart, breathing through pure effort.

Even before they get the diagnosis, it’s pretty obvious that the end has finally come for Crackerjack’s career. Like all athletes, even the Olympic-level athletes that populate street-level superheroics, his time has come and gone.

It’s historically tough, being a professional athlete – going from a champion to the prospect of retirement within a couple of years. Something you’ve trained for so well that you’re one of the best examples of physical expression on the planet Earth, and because time kicks everyone’s ass, suddenly that’s not you anymore. You’re still around, but what you defined yourself as isn’t. So: what now?

So with that weighing on her mind, Quarrel realizes that she’s reached the end of the trail, and before she figures out what path she wants to break, she goes backwards and ties off a loose end, reconnecting with her estranged father – who too, is no longer an Olympic level athlete or a supervillain, but a fully retired man living in an assisted living facility. 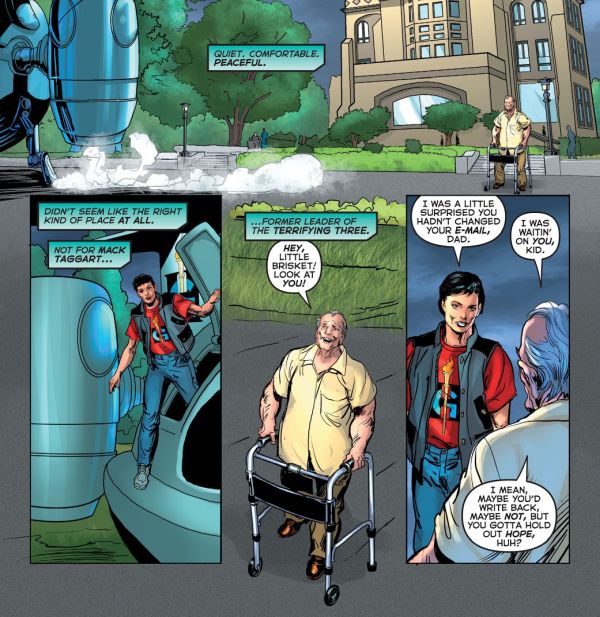 In previous installments, I reflected on what it means to realize that there’s parts of you that will always be parts of you, even as the other things you define yourself by fall by the wayside. Quarrel’s father embodies this – rather than drowning in bitterness or struggling with alcohol or any one of a dozen clichés, he’s living with the resignation (or is it wisdom?) that comes with age, and he’s just gotten on with life. His attitude – again, beautifully conveyed by Brent Anderson here, easily shifting to pseudo-realism as he depicts this ex-con schlub – is “listen, I’d love it if it happened like I want it to, but when a man plans, life laughs.”

So, Quarrel goes back to Honor Guard HQ and tells Crackerjack that she’s taking over his rehabilitation – she’s going to push him like he pushes her, as she resigns herself to the fact that she is in love with a jerk, and likes being a bit of one herself. She’s also retiring as a superhero, the bill for decades of crimefighting coming due, as now her calling – training and focusing and shaping the body – is no longer compatible with dodging bullets but is perfectly well-suited to physiotherapy.

The gender dynamics are interesting – her being a jerk to him as he was a jerk to her, her helping to rehabilitate him as he did her, and thanks to the larger systems of patriarchy both feel like they could diminish Quarrel somewhat even though the only thing that’s changed is who’s helping who. It’s one of those instances where you almost have to shrug and say “the patriarchy – it sucks” because such systems are so widespread, and so insidious, that even as rational an action as “I’ve been dating him off and on for twenty years, so maybe I want to help him sit up straight on his own” can be filtered through that lens. Sometimes it might be better to let a flawed, rough-around-the-edges woman with a crummy boyfriend be that character – when you have enough women in your cast, it’s okay to let a few of them be less than paragons.

And with that, that’s the end of the story of Quarrel and Crackerjack – when they show up again, they won’t be the same, and maybe they’ll be better for it and maybe they won’t. An interesting final page spotlights Samaritan, filled with concerns that the constant fighting of the life of a superhero is costing him his friends…

… but this is a story for another time. Next week, it’s 70s cosmic space stuff, Jesús Marino, and a lot of people who are Comic Book Naked. All in a week’s time – see you then!