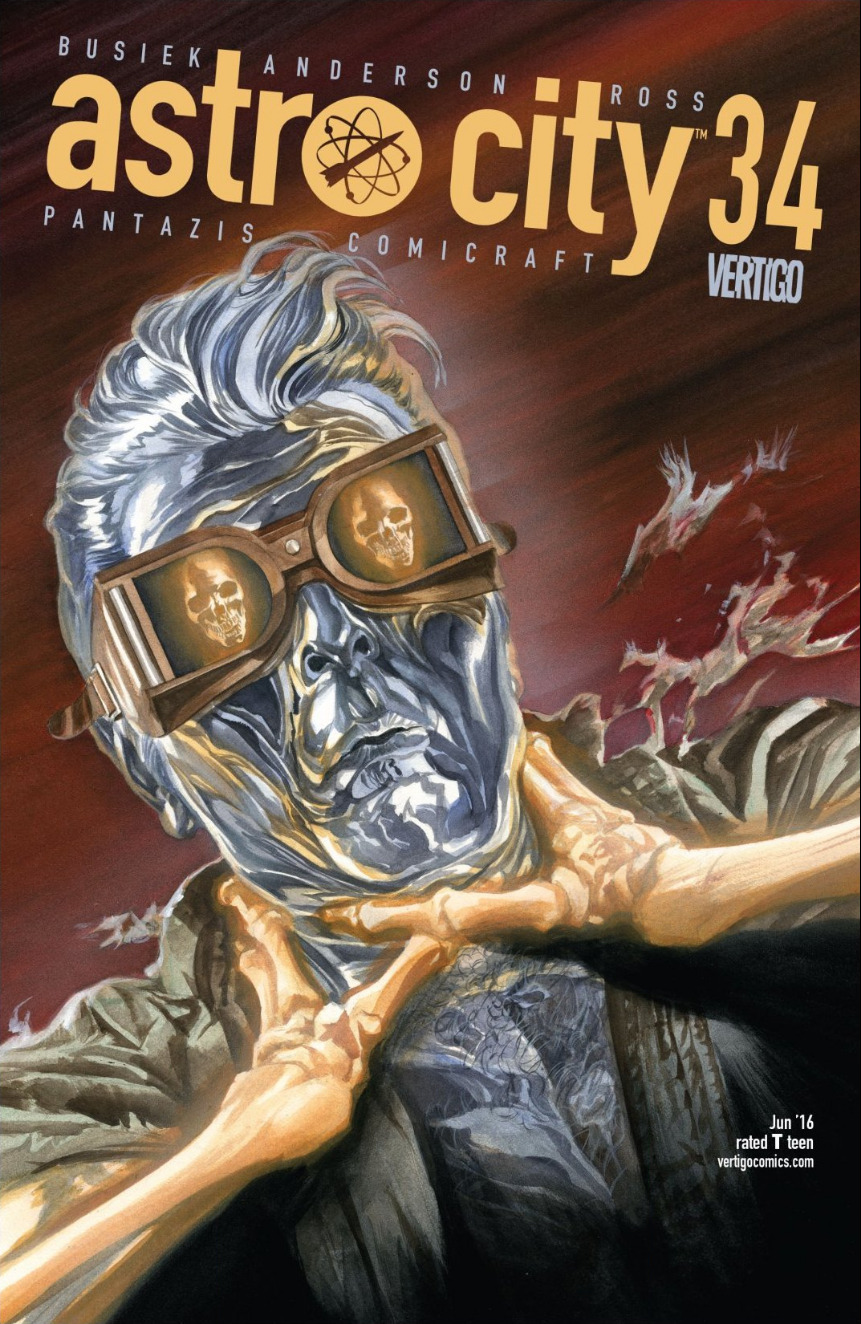 Issue #34 concludes this three-part reunion with Steeljack by having him confronting the villain, in an underground lair that is directly underneath his restaurant (this is a superhero comic, after all. Our villain is a fan – that kind of fan – and what interests me the most about him is what kind of fan he feels like.

His motivation – for framing people for robberies, people to whom the charges would stick even if they’re long retired – is that he wants to “play with the toys.” He thinks of all the superheroes and supervillains mostly in the past tense – who they were, not who they’ve grown to be. Not the villains who’ve gone straight, or the heroes who’ve turned out to be more nefarious than they seem, such as Dame Progress or – from Steeljack’s original story – El Hombre. And he remixes everything until all original meaning is gone and all the remains is the artifice of his restaurant.

He’s a fan turned pro, continuing to “write” stories of heists and villainy long after the villains themselves have gotten tired of it.

Steeljack beats his in a fight, then goes back to his house where he encounters him again…

… .as well as the hungry ghost stored in the supernatural knickknack that he had on the coffee table.

Being made of cold steel, Steeljack has a surprisingly easy time beating up a bunch of ghosts that burn at the touch of cold iron – and then, because he’s at the center of a massive brawl and a rich businessman dying, it’s back to jail for him. In the end, the villain had a point, perhaps: the story has a role for Steeljack, and this is it.

As this story concludes, what strikes me the most about it is the pacing – the villain is essentially dead by page 15, and the rest of it is spent mopping up – either a supernatural entity that his carelessness freed, or sorting out the legal problems that Steeljack’s stepped into. It’s something that’s been on my mind a fair bit – how long is a good epilogue? I feel that if it’s compelling, it’s okay for it to be long, but it’s an interesting choice to make.

As for the epilogue itself, it’s ones again an example of the kind of story that Astro City excels at – taking an archetype, in this case the heavy who boomerangs in and out of prison and is there to be one of two interesting fights per issue – and fleshing them out, showing that there’s more to this person, that they don’t just blink out of the story once they’re in jail. That they have friends who they left behind…

… and those friends can ride in to the rescue as surely as any superheroic team can.

In the end, Steeljack walks free, and manages to get what he always wanted – the family house back. It’s doubtful that this is the last we’ll see of him – or at least, the last we’ll have to see of him – since he is a private eye, in a genre where that’s shorthand for going out and finding trouble.

But it feels like an ending, and a humble one that fits the character; this guy who’s the very definition of “damaged goods” finally gets something he wanted that was always just out of reach. All it was, was a house – but when you’re poor and all the mistakes in your life ensure you’ll stay poor, getting something like a house might as well be up there with travelling at the speed of light, like any speedster superhero. And in this story, no superhero shows up to save the day – all there is, are people like Steeljack, who finally managed to build a community outside of prison walls.

I’ve been thinking a lot about Arkham Asylum of late, and how it probably needs a rethink. It has a purpose as the villains’ “home base,” as it were, in the Batman comics, but it feels like a betrayal of the promise of an institution dedicated to mental health that no one there gets better. If Batman comics wanted to keep the notion of a place where villains formed a community and where they could change – and either grow or backslide – and go through all the various things any community goes through, it might not be a bad idea to look at Keefer Square for inspiration.

Next week (I hope – this has been, ah, a difficult year) – it’s Jack-In-The-Box!!! If you have read this series you know why I’m excited.