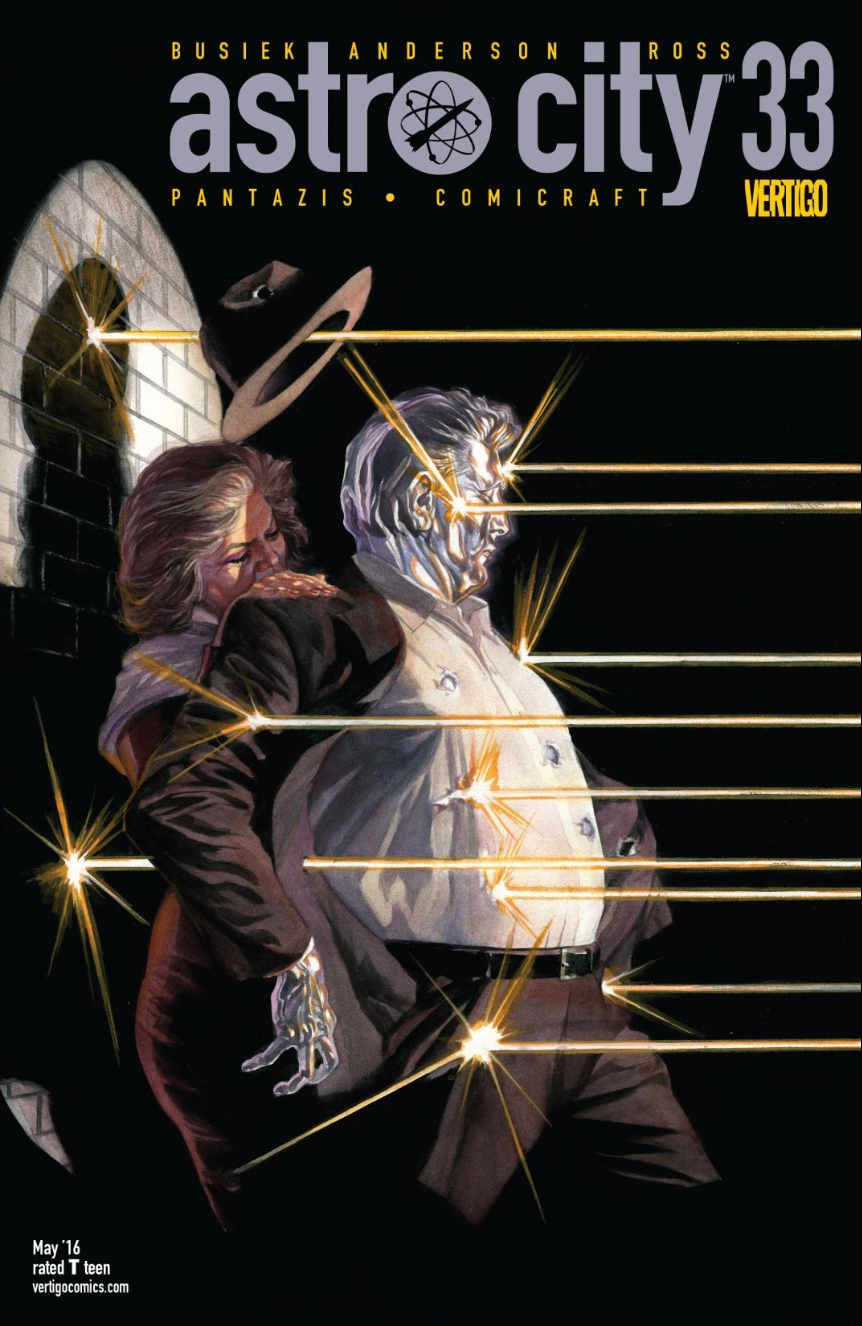 I think, sometimes, about the tossed-off line from Batman in JLA Classified, where he “opens the sci-fi closet.”

It’s a Morrison comic (with are by Ed McGuinness) so of course, it’s a little self-aware. It’s a moment where Noir Batman consciously shifts into Superhero Batman, as he delves into this closet full of wonder-metals and dead Daleks.

It’s a little on the nose, not understanding worldbuilding on one level; whether or not the closet’s open, the technology inside still exists, and would have far-reaching implications in Batman’s world, noir or no noir. But it does work on a visual level – comics are visual, and what communicates the state of the world is how it visually looked; by climbing into his flying saucer, Batman establishes that this is a superhero story, not pulp or noir.

I thought about this, because in this issue, Steeljack and Cutlass take jetpacks to their next appointment.

There is something so endearingly silly, watching a retirement-age man made out of solid metal tootling around in the air in a jetpack with his old flame, a lady who has energy swords. It’s not noir, that’s for sure. On first glance, it’s not even a detective story. But of course, the first rule of any detective story is that looks can be deceiving…

Steeljack and Cutlass catch up, complaining about the downsides of getting older in a believable fashion – of course Steeljack’s fully embraced the streaming age of bingeworthy TV. A guy who describes his detective style as “wait for them to show up and try to kill me” is going to opt for entertainment that asks the least of him. There’s a callback to the Blasphemy Boys, for those of you pinning red yarn and thumbtacks to maps, and then the plot shows up.

Jack and Iz then meet up with one of those “of course” hobbyists that fill every corner of Astro City, a fixer of vintage superhero technology. Jack winds up with a pair of goggles that can see death, and sees a broken reality-rewriting wishing stone – again, totally normal in a detective story – and then, someone shows up to kill the fixer and everyone else. It turns out Steeljack’s method actually work!

As they dig deeper, it all gets traced back to the owner of a chain of restaurants that revolve around supervillain knick-knacks, like the Planet Krypton spoof on Planet Hollywood from Kingdom Come. This sequence, I think, is where the issue gets the most interesting, as Cutlass and Steeljack are confronted by tragedy, given time, metamorphosing into bad comedy.

This story is the sequel to the superhero noir “Tarnished Angels,” and at the heart of the noir is the notion that the system’s bigger than any one person or even one group of people. That something as shocking and colorful and yes, downright dangerous as the supervillain gets swallowed up by culture as it exists under commercialism and capitalism and gets exploited by the system it becomes a part of.

So maybe the superhero and the noir aren’t that different, since nothing truly changes in a noir and the superhero genre is based around the world being simultaneously bananas and not too different from our world. (Of course, in Astro City, the superhero can change in lasting ways – but it still comments on the superhero in broader comics, where much of the effort is expended on finding increasingly clever ways to press the reset button.)

Even yesterday’s hero-turned villain, the Conquistador, the villainous identity of El Hombre, who was ready to wipe out an entire neighborhood to regain lost glory, because he didn’t see the people in it as worthy?

He becomes a hatrack. Just like the grave swallows our lives, culture assimilates what we leave behind, both good and ill.

What does this fan want and will Steeljack make it through okay? (Well, probably not, judging by how this arc opened – but we’ll see, won’t we?)