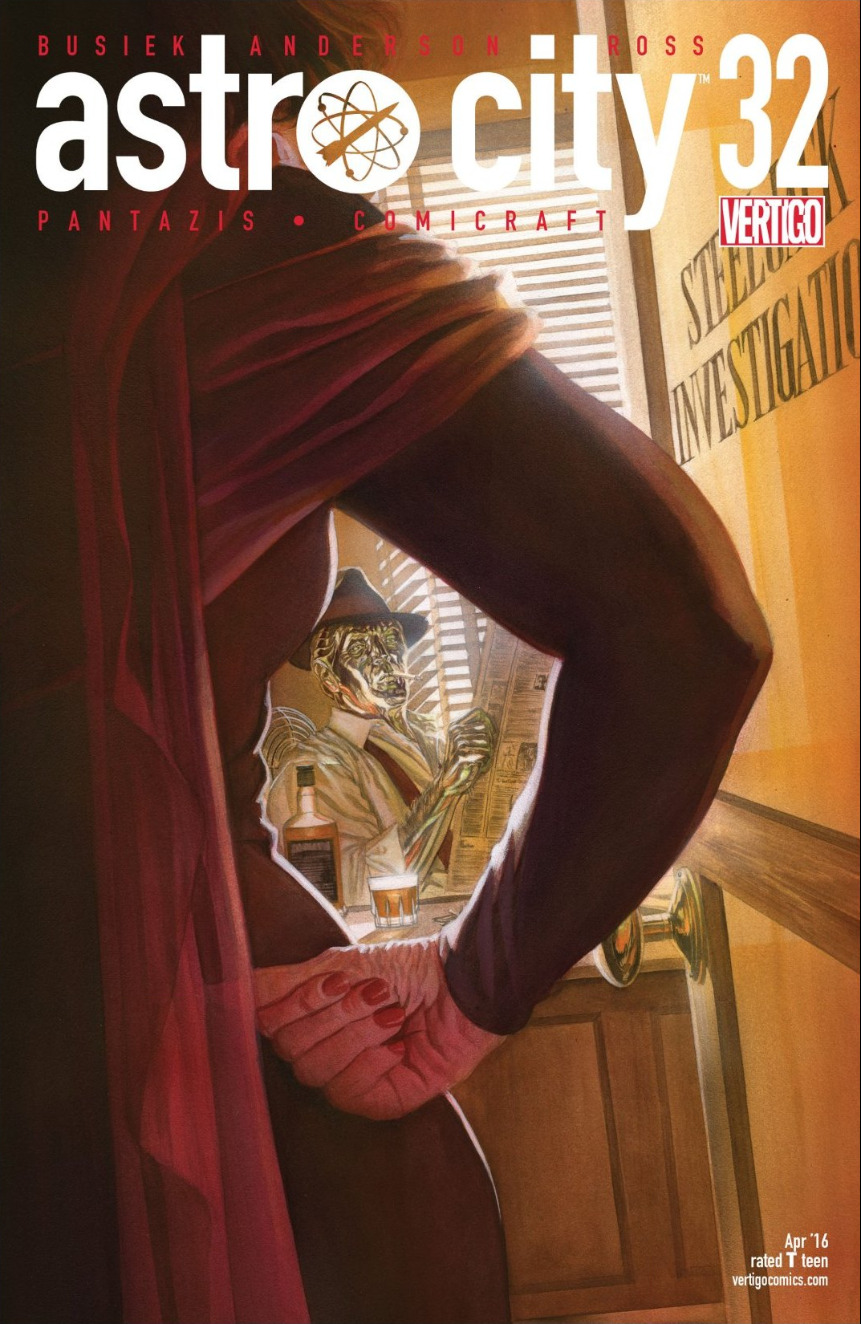 It’s one of the oldest questions that get asked of supervillains; if they have technology or powers that can do that, why rob banks? Why not change the world with it?

The real answer is “because then you don’t get two fights and an interesting villain over 22 pages.” The in-universe answers vary; maybe they stole the technology because they were done wrong, or maybe they love the infamy that comes with being a supervillain – as explained in the classic Astro City story about the Junkman.

But another Astro City story postulates a different, far more depressing take – that once you’re a crook, you’ll always be treated like a crook, and once you’re a super-crook you’ll always be a super-crook. It’s recidivism writ large, and the star of “Tarnished Angel” – the superhero-noir about an ex-con who just can’t seem to go straight – returns in this issue, with things having changed in the intervening dozen years.

Now Steeljack’s mostly gone straight, still poor as dirt and still struggling with old habits, but mostly overcoming them; working over three jobs (who says sixtysomethings aren’t relatable to Millennials?) and complaining that he can’t yell at a woman having sex in a graveyard because then he’ll be considered sexist (okay, maybe he really is an old-as-hell dude after all.)

In one of his jobs, Steeljack is a private eye, owing to a principle that is both extremely comic booky and very practical: if he’s unkillable, he’ll find what you’re looking for out of sheer dogged persistence rather than any particular brilliance. A bit like Columbo, if Peter Falk was made out of metal – and where’s that reboot, Hollywood. But trouble comes knocking…

The detective genre’s an interesting genre, isn’t it? Being a detective in fiction is nothing like it is in the movies, to the point the more realistic takes have to clarify that yes, when they’re not doing interesting stuff, the protagonist really is parked outside the Motel Six with a camera. And the less realistic takes are battling supervillains for the fate of the world, from criminal masterminds to ten-steps-ahead lethal killers. They’re ready-made archetypes who exist to have dramatic stories happen to them. It’s little wonder that the most popular superhero is a detective, too.

And just like with superheroes, no character ever stays gone for long.

Cutlass is another dirtbag villain, the kind that Kiefer Square puts out; someone whose prize ambition is “we’ll get some money together one of these days.” She actually did get out, but now she’s accused of a crime she didn’t commit, and needs someone who knows his way around low-rent supervillainy.

As an aside, one nice detail in this sequence is that the police feel like police in a world that has to deal with the ball of buckwild that is supervillainy; they’re armed with Kirbytech at the crime scene, which has me picturing a universe where David Caruso is waving around a Mother Box (and why is that world not this one.) Astro City’s experimented with the ways you can push our world into the realm of acceptance of the superreal without actually making it unrecognizable, and this is a nice balance; the cops still act like cops, it’s just that they have a spinning thing with lights on that goes ping when they need to investigate a crime scene.

Those selfsame cops aren’t far away, of course…

… but that’s a tale for next time.