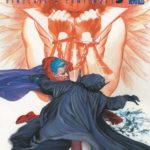 A while back, me and a friend who is also an Astro City fan were shooting the shit in a “what we’d do if we ran a comics company” way. His chief idea was to have two universes, where one of them was everyone kept more or less timeless and iconic, and the other the one where things aged in real-time so that by now you’d be on to Superman’s grandchildren and the full fruition of the Bat-Dynasty.

The latter was informed by Astro City, which has reaped the patiently harvested fruit of – at this issue’s point in time – nearly twenty years of sown seeds. Because this issue reintroduces the Confessor, AKA a fully grown up Altar Boy, who is very different from his predecessor because for one thing, he’s not a vampire. 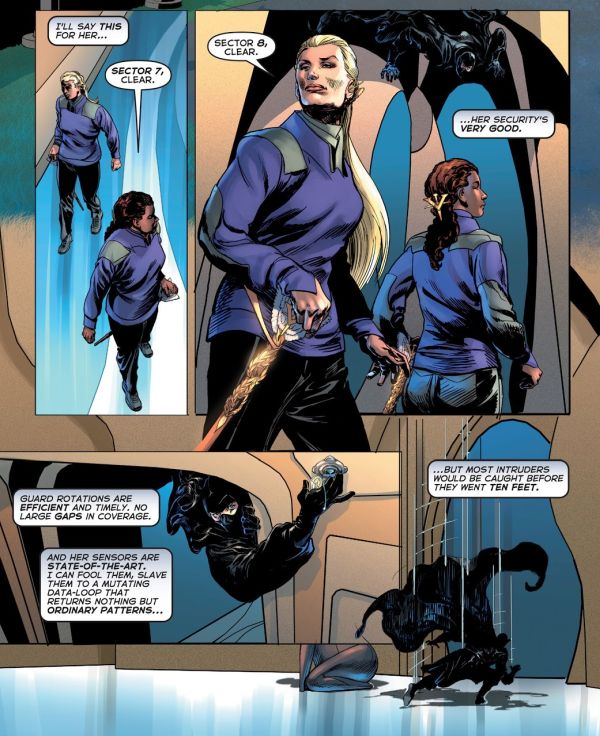 In the classic Confessions story, Busiek and Anderson took the notion of “what if Batman was a vampire” and ran with it, and in the process showed the Confessor to be a very different type of character, not driven by revenge so much as guilt – guilt over falling to temptation and into vampirism, but seeking to use his powers to help the needy.

At the conclusion of that arc, they both moved the character closer to Batman and further away, by having the Confessor die and his sidekick, the very human Altar Boy, train to take over once he grew up – and this new Confessor scares criminals by pretending to be a vampire, which is a far more sensible thing to be scared of in a superhero universe than a cute little bat.

Of course, Winged Victory was under fire as a controversial figure in that arc, too. Some things don’t change.

“The View from the Shadows” has the net closing in on Winged Victory, while Samaritan and the Confessor have a misunderstanding that leads to a brief, but interesting, altercation.. 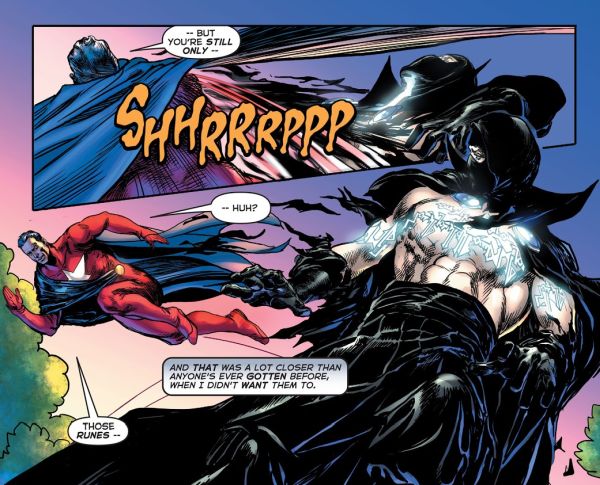 The Confessor makes use of “any advantage he can get ahold of” to win, and in a superhero universe, he’s spoiled for choice. The freedom afforded to an analogue is on full display here – you couldn’t have Batman with a secret mastery of magic runes at his disposal, since that firmly places him in the camp of the superheroic and closes off the avenues of “pulp hero” and “noir hero” that are still valid takes. But the Confessor doesn’t need to worry about keeping things consistent with what’s going on in the current issues of Bible Noir Comics, because they don’t exist. 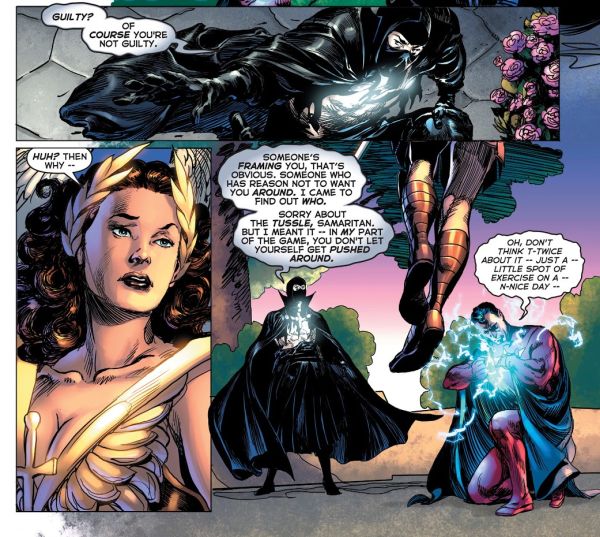 Like his analogue, the Confessor needs to be able to go toe to toe with Samaritan, of course, because otherwise his reputation will be damaged – and his power as a symbol is his chief advantage. He needs to beat Samaritan more than Samaritan needs to beat the Confessor, which is why that story beat in a Certain Other Universe keeps playing out the way it does, over and over and over, no matter how much I might want to see it get resolved the other way in a dramatic and interesting fashion for once.

Just once, you know? It’d be nice.

Since this is a superhero comic, three pages of fight leads to no lasting hard feelings and a teamup, with the trio going over Winged Victory’s rogues gallery, which is probably the most the character’s rhymed with Wonder Woman – a gallery that’s half “the almost certainly male creators definitely have A Thing for this” and the other half being the RC Cola of supervillains. Here’s a robot; there’s a frost guy; also, one character’s into spanking? I guess?? 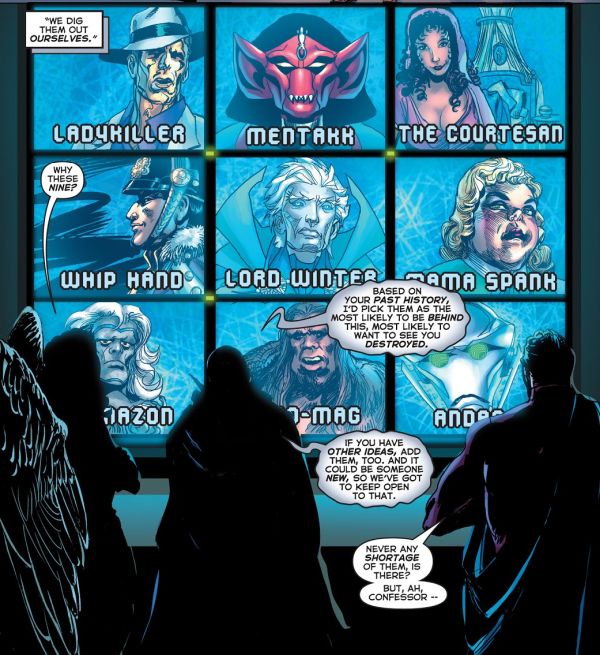 As they go over the possibilities, something very interesting happens, in that Winged Victory winds up briefly pushed out of her own narrative – and the narrative is aware of this, and is in fact, confronting this head-on. In the process, it delivers a salient critique of the idea of pairing up Wonder Woman with, say, Superman or Batman.

If Winged Victory is, above all else, a feminist hero, then her stories need to be focused on feminism, and the characters that fuel those stories need to be written from an explicitly feminist perspective – and not just one feminist perspective, either, but a wide variety of them, as has been seen thus far in her supporting cast. There is room for men in such a storytelling environment, but they ought to be male characters who serve the driving theme of the character – men that help illuminate feminism as their main purpose. 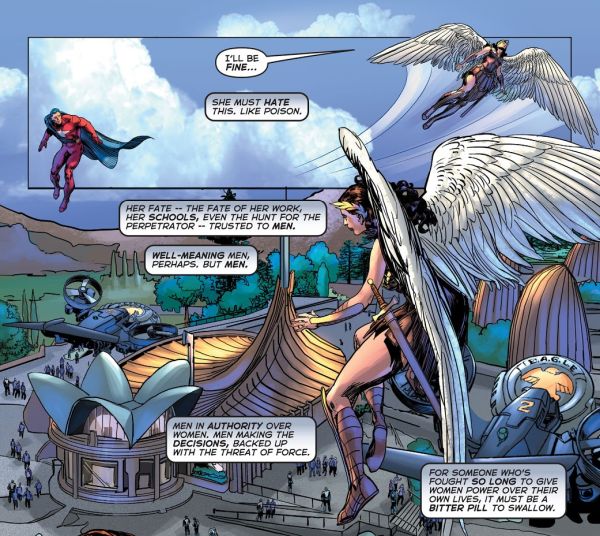 When a character like the Confessor or Samaritan comes into play, the story becomes shared with theirs, and as valid as those stories are, they’re not about feminism – or at least, not as front-and-center about it as Winged Victory’s stories are. In their very first meeting, Samaritan and Winged Victory had a disagreement over who to prioritize in a hypothetical ethical dilemma, and their answers illuminate what they’re about: Samaritan is about saving everyone, and Winged Victory is about saving women, and the latter is a controversial stance even today.

So a character like Samaritan makes things a little more muddled than they would be otherwise, and if a character gets rebooted every five years then they need things to be made clearer, not murkier. Of course, Winged Victory’s never been rebooted, and the narrative clearly knows that having Samaritan and the Confessor around presents a problem to be solved. And thus, this is still Winged Victory’s story.

Things start to build to a head at the end, as we get hints at whoever’s behind all of this, and get a cliffhanger that’ll be resolved in a week’s time. See you then!