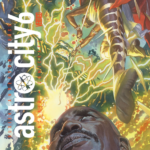 There’s an argument to be made that a good henchperson is the difference between a good superhero universe and a great one. 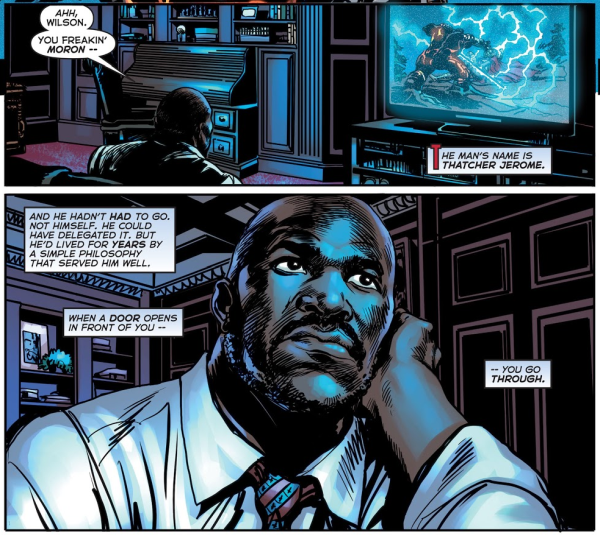 To that end, we meet Thatcher Jerome, a down-the-ranks middle manager in the organized crime syndicate belonging to the Deacon, the super-criminal who decided that what organized crime needed was some good old Catholic guilt. Thatcher is far enough down the pyramid that he doesn’t having to deal with the Confessor; he is, however, looking to change that, based on a simple principle that an opportunity not taken is one wasted.

So he befriends Telseth, the naïve, giant space god with a floating mask for a face, that we saw all the way back in issue #1, and offers to be his supply line. I can relate. If Galactus, Eater of Worlds, showed up and offered me a paying job right now, I’d at least consider it – those worlds’ll blow up eventually on their own, right? 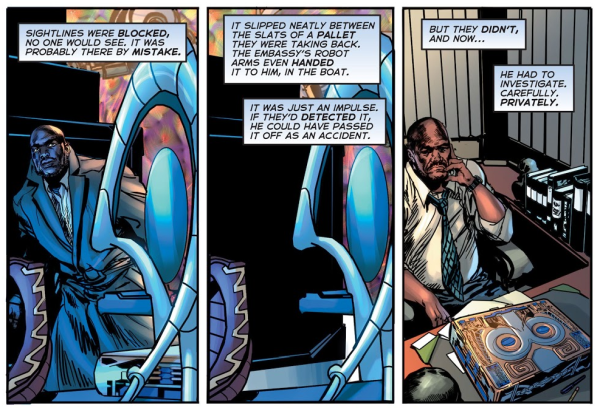 Of course, there’s complications – it turns out that one of the many things inside Telseth’s magic space door is a collection of gas canisters from an alien world. They fall off the back of a truck and into Thatcher’s hands, and that’s where the trouble begins, because they’re essentially filled with Origin Gas. Thatcher immediately gets some ideas, and then, as he thinks about where he is in his life, some doubts. 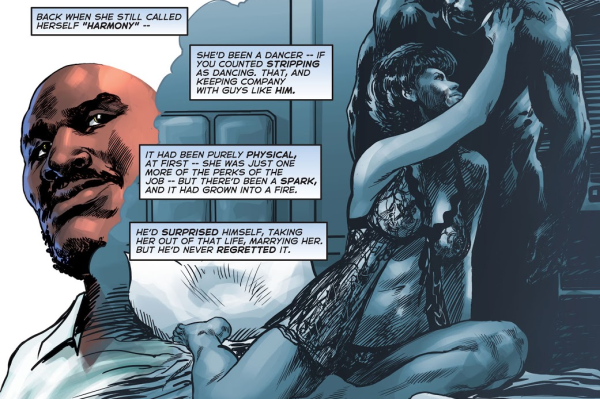 Thatcher has a comfortable enough life, with kids at college and a wife he loves. As an aside, probably the book’s biggest failing is that Thatcher’s wife Rachel is a former stripper, and Thatcher mentions “taking her out of that life,” implying that he rescued her and that in turn, she was in need of rescuing. In an era where the continued criminalization of sex work is a going concern, whether or not sex workers need “rescuing” from their trade is a topic of debate in the broader culture, and the comic only presents one side of it. Of course, Thatcher’s not obligated to have a fully thought out praxis on supporting sex workers – he is a mob player, even if a sympathetic one. This just feels like a missed opportunity that lets a patriarchal concern stand unopposed, and it’s a shame.

That aside, this is a pretty quiet and unassuming story; not one of Astro City’s standouts. The most insightful commentary it makes is one similar to the one from Volume 2, issue #22, way back in 2000 – the one that introduced Sully – namely, that what you think you want and what you actually want are often strangers. 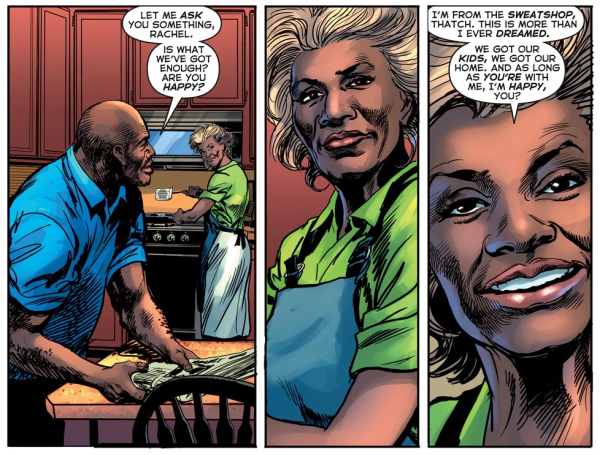 Life in Western society tells us to go for more; more salary, even if we’re comfortable, a promotion or a bigger house even if we’re fine where we are. That historical “great men” fall into despair upon realizing that they are out of worlds to conquer. Thatcher lives his life by this, telling himself that an open door is there for the entering; that no shore should go unexplored, nor any opportunity wasted.

But perhaps going through a door means going there at the expense of staying here, and if what you have here is good enough – if you’ve learned to appreciate the notion of contentment – then gaining more loses its appeal. The status quo of Thatcher’s life isn’t radically altered – which is actually fairly par for the course for a superhero comic, really – so much as he’s recognized a wisdom within himself in a very minor, low-key way.

After the last few done-in-ones, the next few issues take us on this iteration of Astro City’s first epic, featuring a flying hopeful paragon who first urge is to be there for everyone, a dark avenger with little raw power but enough training and contingency plans to make up for it, and an embodiment of feminism that stands as a political figure in addition to being a superheroic one. How these characters are similar to – and different from – the figures they evoke, is what I’ll get into in a week’s time. See you then!