Charlotte FinnI write stuff. Some of it's here. 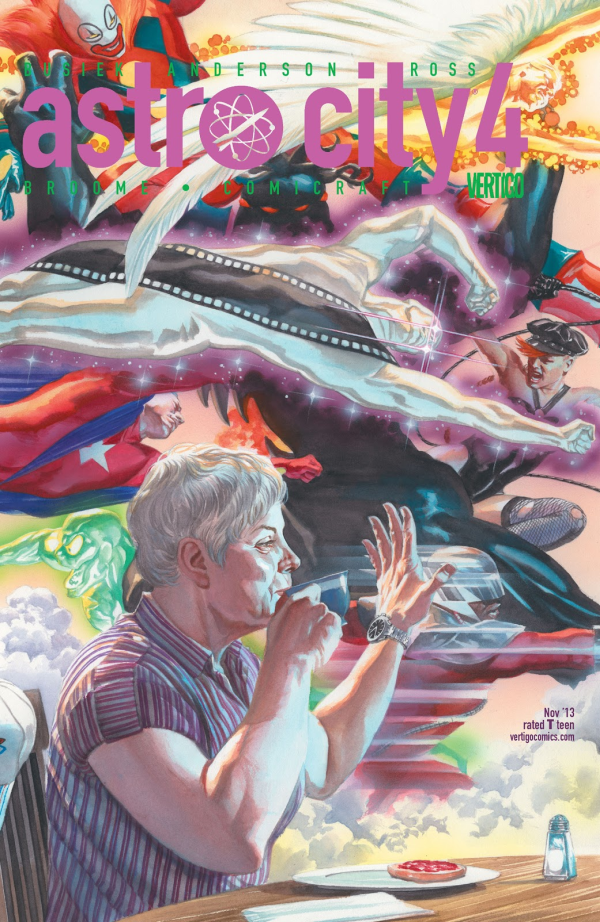 A Year in the Big City, Criticism

Because you demanded it – the return of Mind-Over-Mattie!!

Okay, maybe only I demanded it. But I count too.

Issue #4 concerns itself with one Martha Sullivan, AKA Sully, a woman nearing retirement age who happens to be telekinetic. Sully makes a living as one of the names towards the end of a Hollywood credits roll, coordinating stunts and special effects. She debuted all the way back in Astro City Vol. 2 #22, where she was the stunt coordinator on a soap opera that, in one of English literature’s finest sentences, had added a superheroic character “for the sake of realism.” 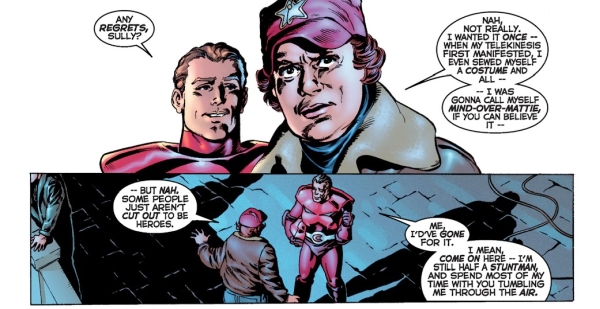 I love Sully for a lot of reasons – she’s a classic working-class member of the community that makes movies and TV, the kind that, in the words of John Rogers, does construction for an hour so that pretty people can act in front of it for a few minutes. In her forties in the late nineties, she’s in her sixties now, and older women in starring roles are rare enough that I’m grateful for every one that shows up. She’s tough, but not tough in the traditional action hero sense – more tough as in, with age has some a resilience and a lowered tolerance for having her time wasted. 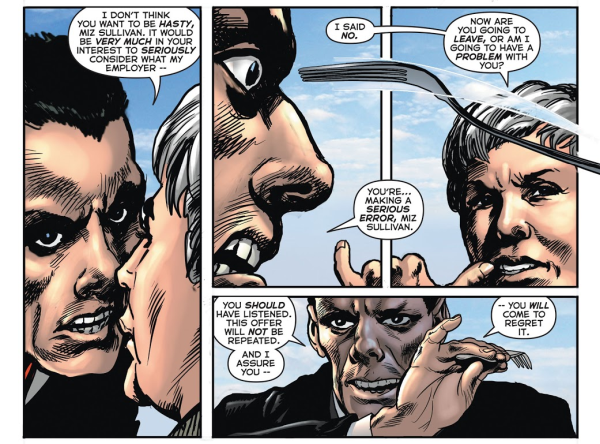 Sully is a self-described “sideliner,” the kind of character you figure has to be there in a superheroic universe even if you don’t see much of them, someone who’s got superpowers and is just fine with leaving the world-saving or universe-shattering to other people.

There’s a lot (a lot) of genre conceits with the superhero, and one of the main ones is the idea that everyone who gets superpowers either dons a costume and selflessly endangers their lives for the greater good, or decides to go out and make money by knocking over the nearest bank. The conventional answer is that a superhero story in the classic mold needs to be at least nominally exciting, with a sympathetic hero, two fights and an interesting villain, and general wisdom is that no one’s going to buy a comic about someone who can levitate if it’s mostly them sorting their mail and talking on the phone. Someone who’s just not cut out for superheroics is, conventionally, not cut out for superhero comics. 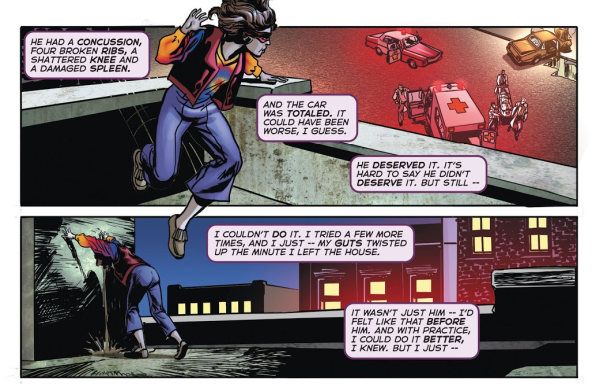 But Astro City is built to tell the kind of superhero story you don’t get in a conventional superhero comic, so here we can follow someone throughout their day as they check their mail, talk on the phone, and grouse loudly when the cheapo supervillain they crossed resorts to something as cliché as knockout gas.

Sully is abducted by a supervillain who’s looking to make a name for himself, dressed like the maître D’ at a restaurant owned by a comics artist who won the lottery. Seriously, the Majordomo’s design is outstanding, the perfect “oh right, he showed up that one time” villain that shows up for one issue and has an interesting gimmick and is gone forever come next month. He even says his own logo out loud, cementing his role as a conventional done-in-one supervillain who wandered into the wrong comic by mistake. 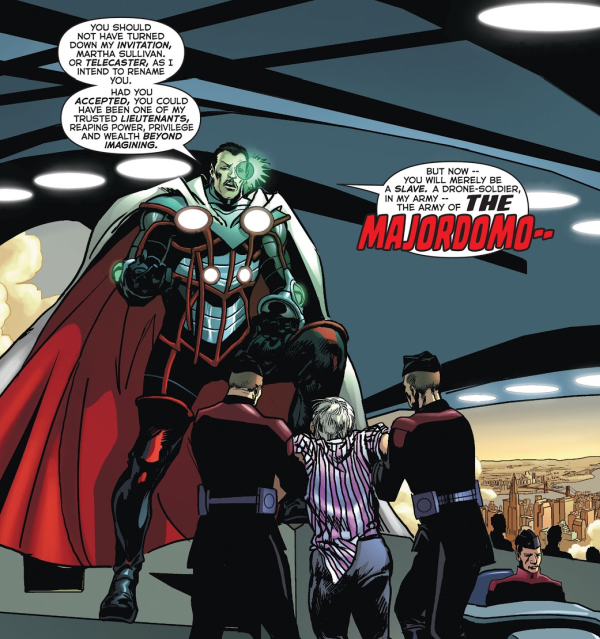 He’s very upset that Sully isn’t going along with the supervillain recruitment plan and has decided to fit her, and others like her, with power suppressors until they’re taught obedience. But Sully is one step ahead, having been through this kind of storyline already and knowing how it’ll turn out; she prepared for her potential abduction, and a cyberkinetic friend of hers persuades all their collars to turn themselves off.

In one minor nod to the overall genre of Astro City, the abducted sideliners are handy enough in a fight to overcome trained henchpersons and a man in a power armor suit, which never feels like a cheat because of Sully’s seen-it-all attitude. I’d question it if it were anyone else, but Sully’s an older woman, and with age comes experience and some level of acceptance and certainty.

This carries over into the endnote, where Samaritan stops by to check on Sully, in a very Superman-like fashion – and in a refreshing change from the norm, Sully’s reaction falls far short of the usual reverence people have for this type of character. I love Superman, but having every civilian react to his presence – or the presence of a character evocative of him – with “wow, let me tell you a story about how much you mean to the human race” gets old, like anything else if you do it too often. 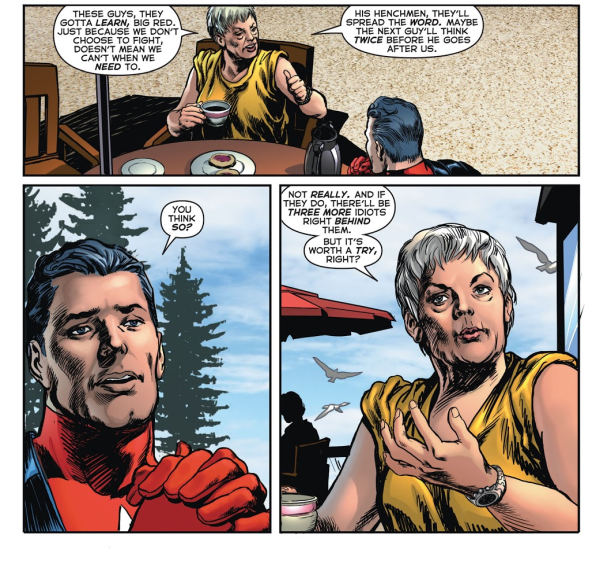 Sully’s reaction of “well, he’s nice enough, I guess I’ll be polite” is true to the character and a nice change of pace for a civilian reacting to a world-beloved superhero. Sure, he’s saved the world a few dozen times and all, but she was in the middle of a really good breakfast and there’s such a thing as priorities in life.

Sully doesn’t end the story having undergone a character-issue character arc – she hasn’t really learned anything, and her life hasn’t changed. But that stability is part of the message – she is doing just fine for herself without all this superheroic stuff in her life and she doesn’t need any supervillains knocking down her door to make her feel important. A lot of standard-issue superheroes and supervillains in comics are trying to fill a hole in their souls, and maybe they could all do well for themselves if they were a little more like Sully.

Sully’s story ends – this is a done-in-one – and next issue returns us to the string-maps of the Broken Man and not one but three short stories, all back to back. See you then!