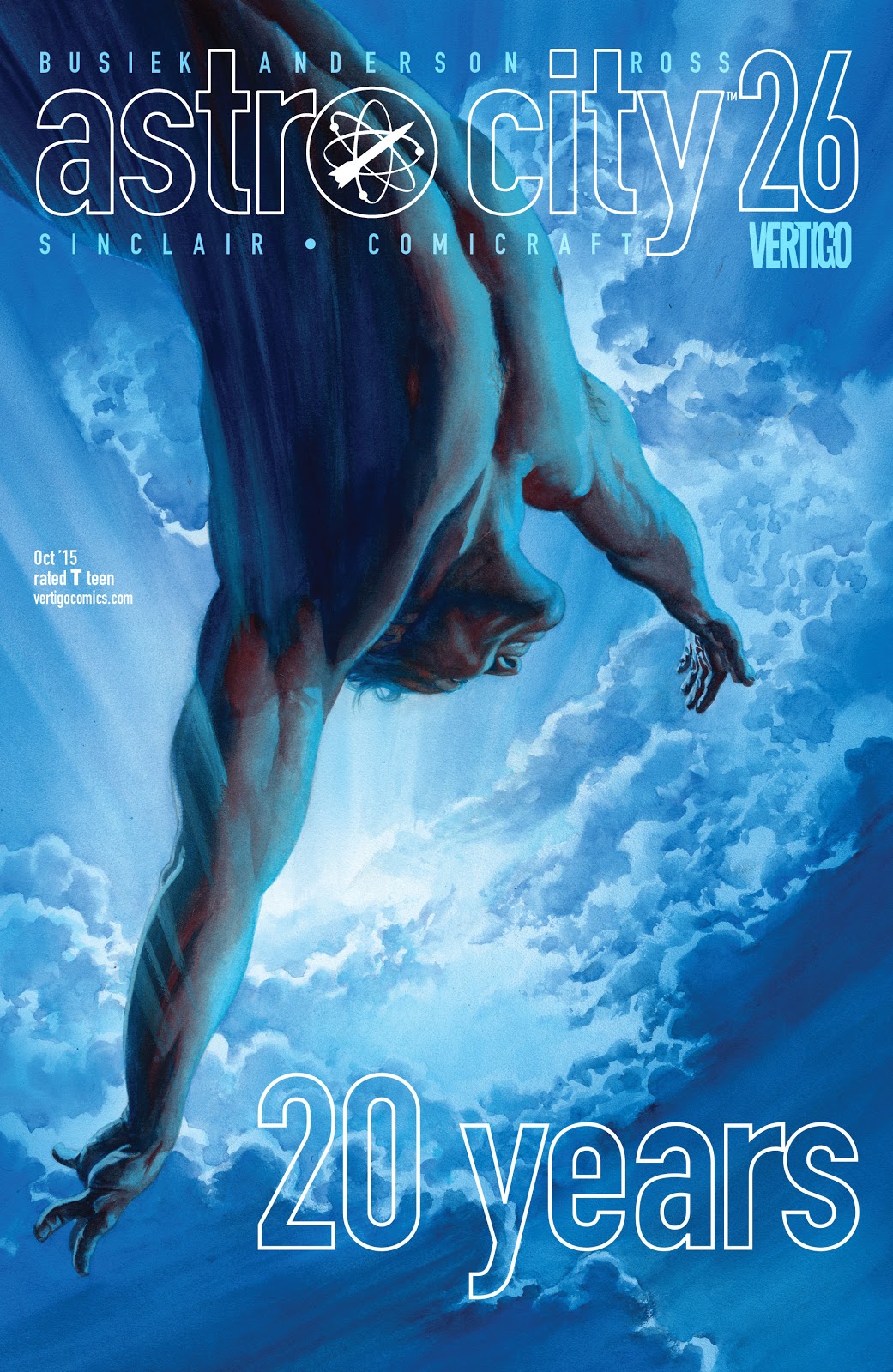 Okay, not twenty continuous years – Kurt Busiek’s famous (and scary) brush with mercury poisoning meant that he had difficulty writing at the level that Astro City demanded for a while there. And if the conceit of this series is that Astro City got revived, it needed to go away long enough to be missed.

Western comics don’t get long runs often, and it’s not hard to see why – sales tend to trend downwards over time and can always be goosed by a new creative team or a relaunch. More than that, though, working any job for twenty years – and moreso, any specific subset of that job – will lead you towards burnout. And when you look at the impact of twelve issues of Watchmen (the only twelve issues) there’s a case to be made for the shorter run.

But the bulwarks – Stan Sakai on Usagi Yojimbo, Chris Claremont on X-Men, Geoff Johns on Green Lantern, Terry Moore on Strangers in Paradise, the Robert Kirkman empire that is The Walking Dead – have shown the fruits that can be reaped from sticking with it in the long term. Sheer dedication, in addition to the refinement of craft, has made them a lasting part of the landscape and the conversation. And so it is with Astro City – because marking just how much time has passed since that #1 way back in 1995 shows us what makes the world special and unique.

We center, once again, on Samaritan, who again, is not Superman, honest. Now, he is a flying hero with a cape, he is ridiculously powerful, his name starts with an S, and his secret ID is a newspaperman (a fact-checker rather than a reporter, granted, but still.) But he differs in important ways as well – he hails from an apocalyptic future that was wiped out when he traveled back in time to stop it from happening, he’s cosmic in a way that Superman is not, his supporting cast is markedly different.

But he still evokes Superman in one important fashion…

… in that the notion of him being careless or out of control is disturbing.

He also evokes that character in the sense that the universe – while not built around him as the first superhero – is, in that DC Comics post-Crisis sense, built around him as the superhero. (There’s a reason he appeared in 1986.) He sneezes and the world catches a cold. And so, when he’s got to be out of action for a diagnostic for fourteen hours, we see everyone step up.

It’s a crossover without being a crossover – cameos from everyone from the Gentleman to American Chibi – as Samaritan is examined, and his subconscious is delved into. He delves into the iconic bookending sequence from Astro City #1 – the flying dream.

In an interview many years ago with Word Balloon, Kurt Busiek once said that Samaritan was born not of Superman, but the icon of Superman – the iconic Flying Hero with Cape, who basically is Superman but also can be something else at the same time. He also said that Astro City #1 came out of a simple question: why would a superhero dream of flight if they could fly?

Flying dreams have been interpreted a bunch of different ways. There’s the common notion that flying represents freedom – which, in Astro City #1, meant peace; a world that could wait for a while. When waking, Samaritan spent all his time flying in between places, counting off the seconds he got to enjoy his gift. (He no longer seems to do this – he appears to have found a different sort of peace now, the peace of companionship.) There’s the more ribald notion that flying is equated with sex, which – well, I suppose that the opening sequence of this comic qualifies.

But it does illustrate that Samaritan’s fundamental loneliness – the idea of Superman as workaholic – has changed, on a fundamental level, with his relationship with Winged Victory, which hasn’t been retconned or rebooted or taken off the table because some writer wanted him to feel young. And the reason is that the writer doesn’t want him to feel young – Busiek wants all the characters to age in real time, and so Samaritan has grown in a way that he just couldn’t if he were a Big Two character, his concerns filtered through the prism of dozens of creators and an editorial department that talks past them.

So now the clanging of the alarm is replaced by the disquiet within Samaritan’s soul, which has been exacerbated by – again, evoking Astro City #1 – the Living Nightmare.

It too, has changed – in the original comic it was a single entity, but now it appears to have been reborn as a microscopic infection. It’s not Doomsday – it’s never killed Samaritan – but it again, evokes the icon of Doomsday, or the Parasite, of that kind of single-minded villain you need to custom-build in order to take on a hero as powerful and important as Samaritan. There’s a whole twenty years of “whatever happened there” that’s glossed over, because what happened to the Living Nightmare isn’t as relevant as what the Living Nightmare is – a metaphor for our own fears and doubts and worries, made large enough for a superhero to save us from.

… except that it hasn’t. It’s rooted in a very mortal concern – simple anxiety and worry, of something that’s a lot less easy to punch.

1995 feels like a different planet some days – before 9/11 and the multiple forever wars, before the Great Recession, before the Internet went from a curio to a necessity (and possibly to a detriment to our own mental health.) It feels like a more anxious time, these days – or perhaps what’s changed is that we can be a little more honest about our anxieties. And so it is with Samaritan – in the twenty years since he’s probably saved reality twice a year, which adds up to forty times. That’s a lot or pressure, and as we roll on in life, the stresses and pressures we’re under wear down on us – an older Samaritan may be a more wise, mature Samaritan, but that’s because he’s lived through the difficult times that led to all that wisdom, and still carries them with him.

And of course, there’s the threat the Broken Man keeps talking about, which is a job specifically not for Samaritan – and when you feel like you’re alone, a problem you can’t solve is a problem that can eat away at you.

But now he’s no longer alone – he has help from all those characters we were introduced to in the twenty years since Astro City #1, that followed in his wake fictionally if not chronologically. And that, plus therapy, and the superheroic equivalent of taking his meds, makes it all a little easier to deal with.

Next week: American Chibi! Your favorite new character, even if you don’t know it yet.

I’m now on Patreon! If you subscribe to it, you get early access to this and all my articles in this series. Please check it out!